When I worked at the bookstore, one of the most prominent authors on the mystery/suspense/thriller shelf was Ted Dekker. His titles were intriguing. His cover art even more so. So I used part of my Christmas Amazon money (yes, I ask for Amazon  gift cards every year) to buy the e-book omnibus edition of his Circle Series. From what I read it was a blend of two stories: a modern thriller story and a futuristic-yet-unwesternized-fantasy story. Cool concept, right? I certainly thought so. I should also mention that Ted Dekker is a Christian Fiction author. I usually don’t read Christian Fiction unless the reviews specifically say that the story is unbiased (aka not preachy). I did my due diligence on Mr Dekker and was satisfied that his books dealt with Good vs Evil. I said, I can live with that. Bring it on, Teddster. One last thing to point out and I’ll get to the rant, I promise. The Circle Series is made up of four books, Red, Black, White, Green. Green is the odd man out because you can read it at the beginning of the series or at the end. Hence, the “circle” concept. Man, this is gonna be good, I thought. 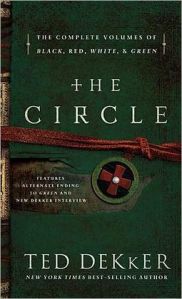 In the end I wasted the whole month of February and first week of March reading this series. I even stayed up until damn near 2am one night to finish the damn thing. Because I just couldn’t do it anymore.

Rant over. I feel better. Thanks.

8 thoughts on “Not a Review. Definitely a Rant.”