Wait, that came out wrong. It sounds like English is my second language. And it’s also a rather disturbing thought. So, let’s be clear on a couple of things: English is my first language (and only language thanks to most American schools not offering foreign language until Junior High), and I don’t want to be IN a coma when I grow up. But that title got your attention, didn’t it? 😉

Anyway, so what AM I talking about? I’m talking about one of Robin Cook’s first novels, COMA, that was recently adapted into a two-part mini-series/TV movie thingy on A&E. As soon as I saw the commercial preview, I was on board. When I was a kid in about 4th or 5th grade, Robin Cook was the kind of stuff I read. Yeah, I occasionally read Christopher Pike and RL Stine, but mostly I enjoyed adult authors like Cook, Stephen King, Patricia Cornwell, Dean Koontz, etc. I know, I know, I was a kid genius and you’re very impressed. But that’s besides the point. Did you happen to catch COMA last week? It was amazing. For those not familiar with the premise, incidents of patients falling into a coma during routine surgeries is at an all-time high at Peach Tree Memorial Hospital. The patients are then shipped to the exceedingly creepy Jefferson Institute under the guise of fantastical medical care, but really, they’re unwilling human guinea pigs for doctors sick of experimenting on unwilling actual guinea pigs. Medical resident Susan Wheeler takes note of the alarming rate and she sets out to do some digging…and all heck breaks loose.

The original book cover. As far as I know. I wasn’t born yet.

Of course the series had to undergo a huge overhaul in order to keep up with modern medical technology and the advent of the cell phone, and maybe even computers. Let’s not forget the book was originally published in 1977 and the movie was released in 1978. Regardless, the new version was amaze balls. 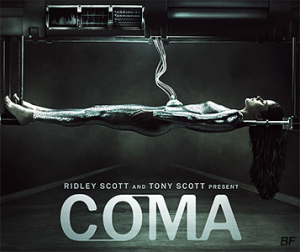 Where am I going with all this?

I WANT A MINI-SERIES/TV MOVIE THINGY!

People always ask you who you would cast in your novel’s movie adaptation, (which I am fully prepared to answer now, by the way), and I seem to think my story would be better suited for something on TV. I used to think my only option would be a Lifetime movie with Tiffani Amber Thiessen playing the lead (which would make me gag a million gags). But A&E? Now that’s a notion I could get used to. And a two-parter? Even better. Then nothing would be rushed. Details wouldn’t be skipped. Man, that would be awesome-sauce. Definitely an ultimate goal, right up there with winning the lottery and bearing a child who becomes a professional athlete. You may know such goals as pipe dreams. Tomato, to-MAH-to.

In other unrelated news, I’ll be participating in Bridgette O’Hare‘s The Next Big Thing Blog Hop via the incomparable Robert Chazz Chute. His post appears today, so hop on over and read it. That’s the purpose of a blog “hop” right? Then next Wednesday you can hop back here for my post. And if you want to help keep the chain going, I’m looking for five volunteers to post on the same date. My email address is ava.easterby@yahoo.com.  Let me know if you’re interested.

Now, if you’ll excuse me, I’m heading to the shore with hubby-pants to take an early autumn walk on the beach. Be jealous. Be very jealous.